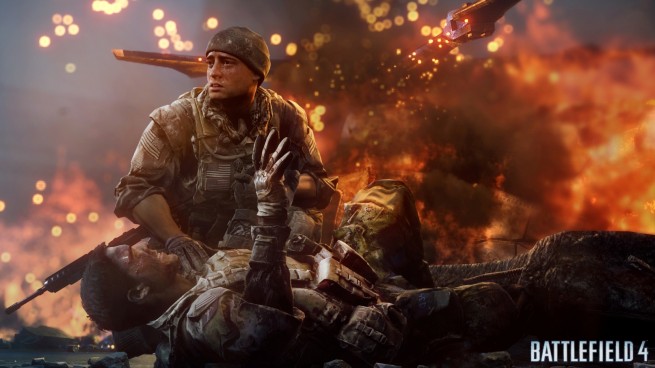 Battlefield 4 offers more opportunities for epic moments and thrills in the Battlefield series. It focuses more on single-player storylines, unbeatable destruction online and evolution events that change the map as you know it. The entire Battlefield series is full of memorable happenings immortalized on YouTube and on gamer blogs and social media sites across the internet. This new offering in the series, Battlefield 4, promises even more than ever before.

Both off and online play takes a giant leap from Battlefield 3 to 4. Single player experiences the most change with a more personal focus. Pac and Irish, your squad mates, have more interesting personalities and you will enjoy more banter and memory-making episodes between the killing and destruction. They even express tastes in music.

Although 4 excels in personality and gameplay, the overall story arc has some gaping plot holes and players may be left with a lack of reason to shoot everything in sight. You never quite know what is going on and some of the important background characters are not explained well at all.

While gamers complained that Battlefield 3 felt too far diverged from multi-player, BF4 brings back that feeling during single-player mode. Amazing events such as tank battles, tropical storms and bursting dams make the environment exciting. Multi-player capabilities like points for kills and unlocking kits works the same solo.

None of this should deter you from playing Battlefield 4 in multiplayer as well. Online play benefits from levolution and inclusion of proper destruction. When a building collapses, the map changes during the Siege of Shanghai. Other events affect things even more and forces a shift in gameplay and tactics. The typhoon in Paracel Storm requires increased naval combat, while Flood Zone city changes funnels heated conflict to the few dry places left.

While PC gamers will be treated to more advanced graphics and destruction, console gamers get the most benefit. The PS3/360 games support 24 players and their maps scale to fit how many people are in the game. While this condenses play style to improve balance, detail suffers. There are fewer objects on the map, destruction is not as detailed or realistic and the view distance is smaller.

Current-gen frame rate of 30fps does not allow for the polished graphics and game play you want. This difference can really affect your immersion and enjoyment of the game so we recommend buying for the next generation of consoles.

Levolution has been a great success and contributes to the amazing design of the levels in Battlefield 4. Multilayer maps let you combine air, sea and land combat on a grander scale with up close and personal firefights. No matter what your preferred play style, the maps will provide you the opportunity for maximum destruction. When you drive a tank through a house, it collapses. When you spot your adversary on the beach, you can land your jet ski to kill him. Want to utilize your expert aim? Hang out in a tower with a high powered sniper rifle and shoot the bad guys out of helicopters. This game is full of memories just the waiting to be made.

For all the benefits, there are still some points that detract from the Battlefield 4. While the developers cater to the Counter-Strike fans with Defuse, a one-life, 5v5 battle mode, the focus on twitch shooting instead of intelligent tactics and warfare makes it fall flat. Commander mode is boring for the people who like to get right into the action. If you enjoy tactics and hands off direction, you may love this part, but I think most people who play the game would rather get their hands dirty.

Obliteration, another new mode in BF4, offers a fun diversion for those who like fun bomb games. The maps skill to fit the mode and the number of players on your team. While playing in this mode, people tend to chase the guy holding the bomb, which provides some entertainment as well.

Multiplayer offers, perhaps, the most benefits with more aggressive game play style, and without turning into a Call of Duty twitch shooting clone. There is no super class or super weapon that can destroy everything in its path, so those who enjoy god mode may feel let down. People that actually like to make an effort and learn their class will find it easy to benefit any team on any mission.

It’s the tech behind the game that makes it great. PC and PS4 versions are smooth and responsive because they are locked to 60fps instead of the 30fps of older versions. Vicious firefights, smaller, more condensed maps and massive levolution destructions remain smooth and beautiful.

This is the best Battlefield game ever designed and released. All single player mode may fall flat in a few areas, multiplayer provides incredible action steeped in a rich and dynamic world. These qualities shine the brightest in online mode however. Imagine yourself sprinting through in a broken down factory at the Golmund Railway while taints bear down on you and mortar fire rains from the sky. Your screen is shaking and your heart is beating a mile a minute. These are the moments that make you truly appreciate the Battlefield 4 experience.